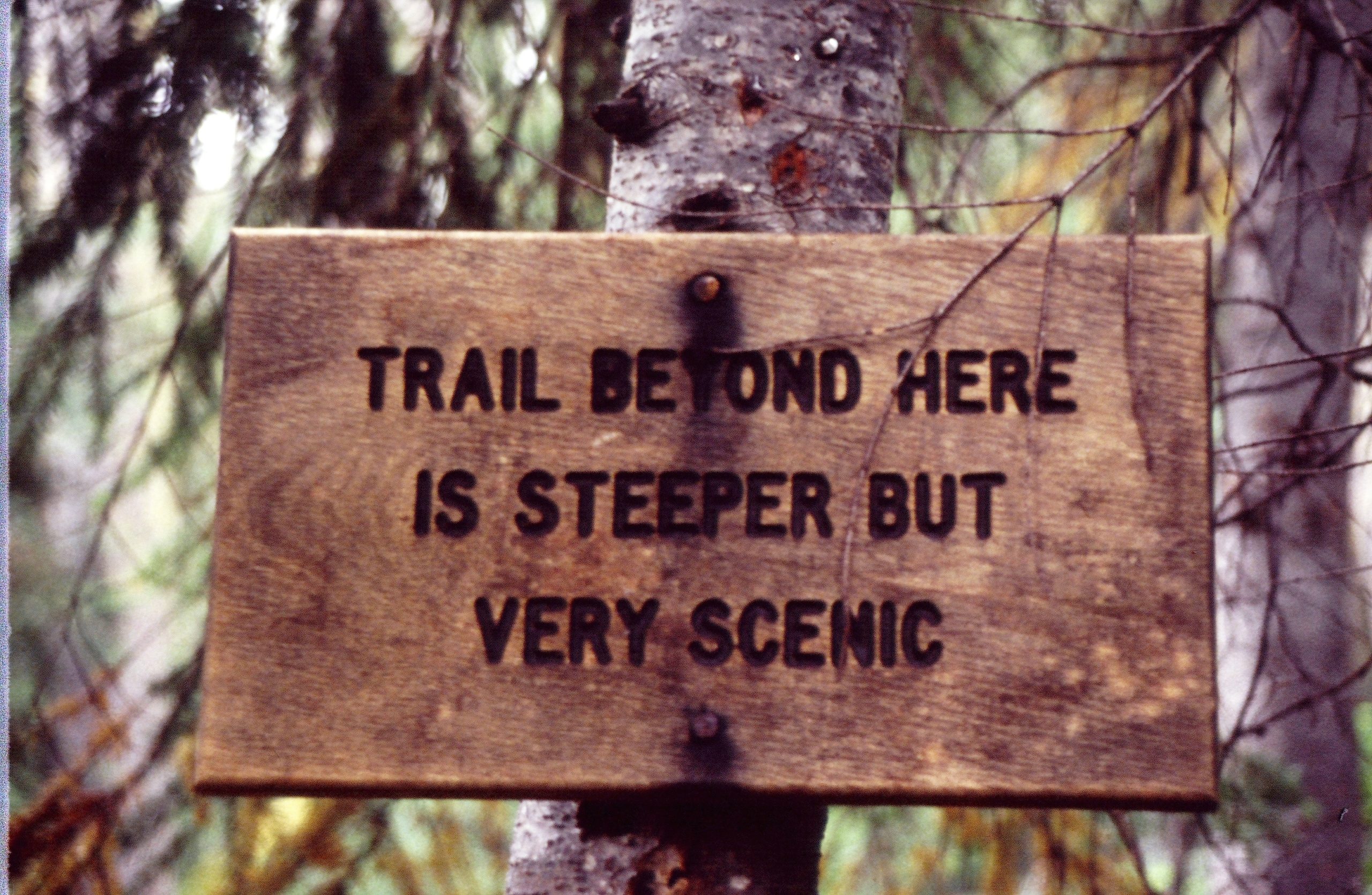 “What’s wrong with this trail?” the perspiring young sportsman in the Boston Red Sox baseball cap complains to me as I catch up with him at the one-mile marker on Echo Mountain Trail. “It doesn’t seem to be leading anywhere. And it’s got too many of those…turning things, those—”

“Don’t you just hate them?”

Caught between the urge to lecture him and the urge to whack him with my hiking stick, I do neither, and simply stride past him with a smile. “I like switchbacks,” I call out over my shoulder.

As I zigzag along on a perfect winter day, savoring the alternating vistas of mountains above and metropolis below, it occurs to me that lately I have encountered a great number of people who are unaware that the switchback is the hiker’s best friend and one of the West’s greatest inventions. Worse, there seem to be increasing numbers of hikers like “Sox” who hate switchbacks. 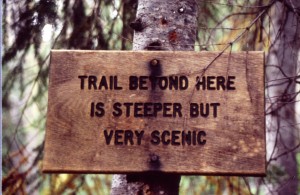 A more lyrical way to describe a hike’s difficulty: “Trail Beyond Here is Steeper But Very Scenic”

Perhaps such bias arises from ignorance, I muse. While most hikers can define a switchback (a trail that follows a zigzag course on a steep incline) and know one when they see one, it’s obvious detractors don’t grasp why the switchbacking way is so wonderful: it’s lots easier zigzagging up the shoulder of a mountain than taking a straight line up it. California’s recreation trails are ranked among the world’s best, in part because they use so many switchbacks to reach so much beauty.

Ah, the beauty. Switchbacking up Saddle Peak in the lovely Santa Monica Mountains. Switchbacking up Mt. Whitney on those 97 superbly graded switchbacks hewn out of granite —one of the finest examples in America of the trail builder’s art—at sunrise when the switchbacks slowly turn pink, then a magnificent fiery orange…

The sound of a cell phone ringing ends my reverie and draws my attention down to Sox, two switchbacks below. As I zig north and he zags south, I overhear Sox tell his caller: “This crazy guy I met likes these *#[email protected]@% switchbacks.”

Switchback haters like Sox seem to be divided into two camps: some would prefer to eliminate them altogether in favor of straight Point A to Point B style pathways; others regard them as an unavoidable necessity that gets you up a mountain at a maddeningly slow pace. Sure you gain elevation, but so slowly that the trail becomes repetitive and the trudge becomes a drudge.

You don’t know what you’ve to ‘til it’s gone and even I never fully appreciated the switchback until I hiked in the eastern U.S. A decade ago I was commissioned to write a book about the great hikes of New England and before I hit the trail wondered: After ascending the West’s great mountains, how difficult could it be for me to summit a piddley, 3,000-foot peak?

Very difficult, I discovered, because New England trails lack switchbacks. In fact, New Englanders take a perverse pride in the steepness of a trail. Slogging up a trench-like trail eroded down to the bedrock straight up a mountain is true hiking because it’s such hard work. Apparently, switchbacks would add ease and pleasure to the journey and run contrary to the Puritan ethic. Idle feet are the devil’s playthings or something like that.

Switchbacks in the Western U.S.

I feel blessed to have been born west of the Rockies, where trailblazers took a different approach. Many now-popular pathways were first prospectors’ trails constructed with switchbacks for the use of pack animals. This switchbacking tradition continued when trail use changed from business to pleasure. Traditionally, western land has been cheap and there’s been plenty of room to roam, so that a trail builder can afford “the luxury” of long, meandering switchbacks.

A few switchbacks from the top, my thoughts drift to friend and fellow Californian Greg Miller, now president of the American Hiking Society and stationed in Washington D.C. “I’m going through switchback withdrawal,” he confessed recently. “Where are my beloved switchbacks? Philosophically speaking, what’s wrong with hiking back and forth in a never-ending zigzag pattern?”

Yes, that’s it, switchbacking is a philosophy. Sure I appreciate, more than anyone, the switchback, the noun, the thing, but it is switchbacking, the intransitive verb, the process that literally and figuratively gets my heart pumping. When we talk of the trail switchbacking over the mountain and hikers switchbacking up the trail, we are talking about a philosophy that values the journey as much as the destination.

You see, Sox, switchbacking is more than a better way to build trails; it’s a philosophy, best studied and practiced in the West’s wide open spaces. California is all about creative movement—in the performing arts, on the football field with the West Coast Offense, and on the hiking trail.

Far, far below, I see Sox in rapid retreat back to the trailhead. Guess the switchbacks got to him.

Sox, you need an attitude adjustment. Switchbacks don’t force you to see everything twice, they help you view the world from every point of the compass.

Switchbacking, like life itself, is not all about getting from one place to another as fast as possible; it’s about getting there the best way possible.