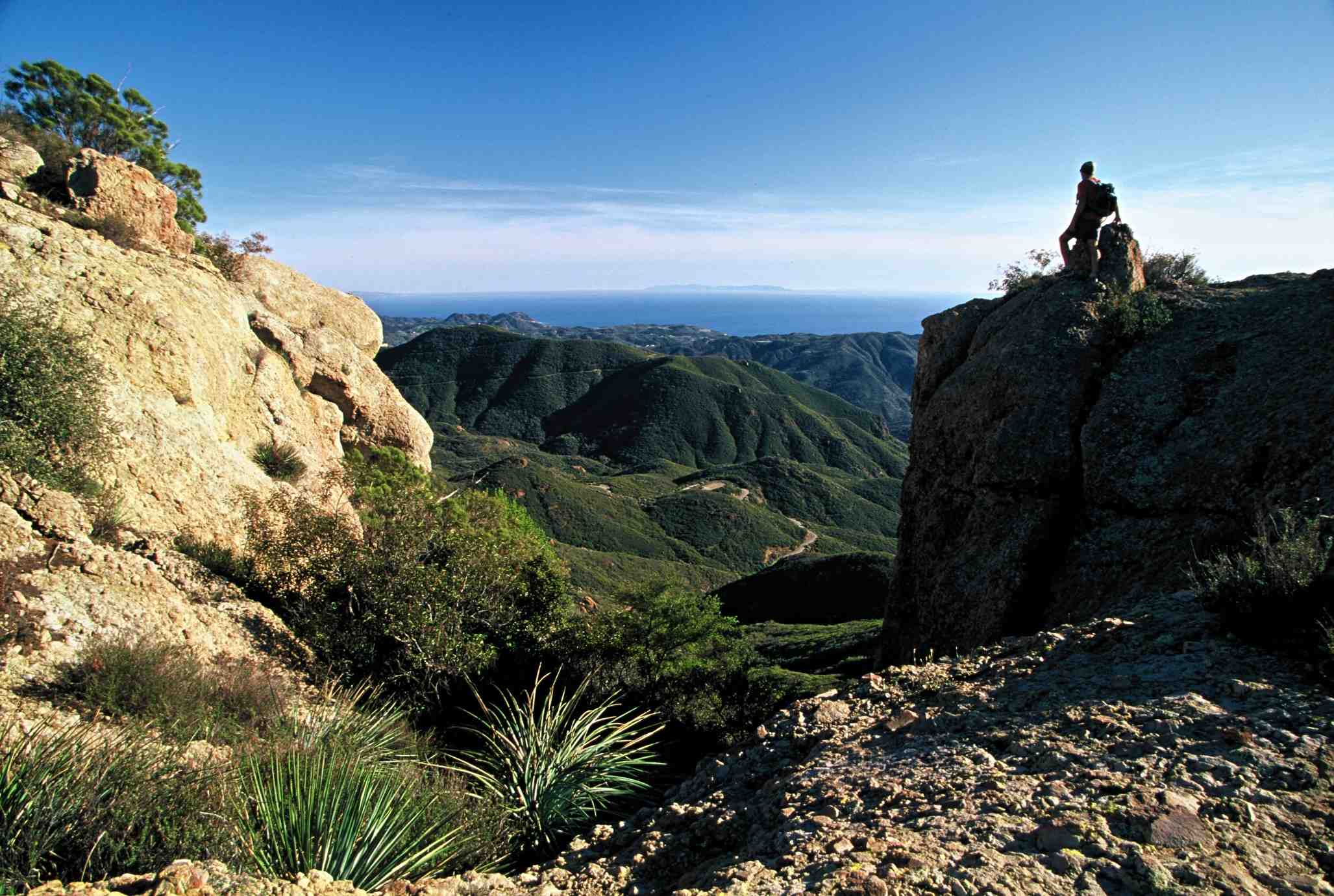 Why I Like to Hike the Santa Monica Mountains

As a young adult I lived in the most urban section of the Santa Monica Mountains—the Hollywood Hills—and in one of the most rural parts—Topanga Canyon.

The home mountains are where I camped overnight with the scouts and learned to drive a car with a clutch. Later in life, the home mountains helped me unwind from the stresses of metropolitan life. 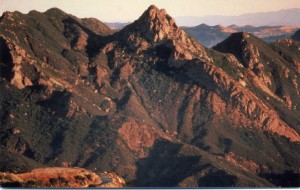 Going back to the 1980s, I’ve helped defend the home mountains from unwise developments, cheered supporters and chastised bureaucrats, celebrated new parklands and new trails. I even spent the greater part of a year mapping, promoting, and speaking out for the Backbone Trail, the 65-mile pathway that extends across the spine of the range.

All of which means I have a particular fondness for hiking the Santa Monica Mountains and delight in sharing my favorite trails. Wildflowers, waterfalls and wonderful scenery that’s been the backdrop for hundreds of movies and thousands of episodes of TV shows are highlights for hikers. 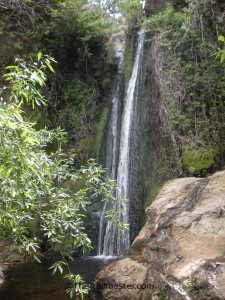 More movies and TV shows have been filmed in the Santa Monica Mountains than anywhere else in the world, and it’s lots of fun to hike to and through movie locations. Malibu Creek State Park, just to name one park, has served as Wales, Korea, Connecticut, and even the Planet of the Apes. Other park sites in the mountains have subbed for the Wild West, Italy, Switzerland, Asia, outer space, and a variety of fantasy locations. More than 500 productions a year take place in these mountains.

Because M*A*S*H, both the original movie and the long-running television series, was filmed here, and because what is now parkland used to be a movie ranch, Malibu Creek is the state park most associated with the film industry. Thou¬sands of visitors a year hike out to the original site of the M*A*S*H filming. 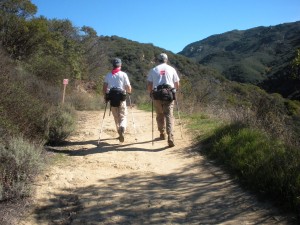 We who love hiking in these mountains are forever grateful to Milt McAuley, who wrote trail guides and the classic Wildflowers of the Santa Monica Mountains.

“Come on an adventure, walk the trails,” urged McAuley, who hiked until shortly before his death at the age of 89. “Experience the beauty and friendship that is waiting for you.”

Bordered by two of the busiest freeways in the world—the Ventura and San Diego—they remain a near-wilderness. Within easy reach of 16 million people, they nevertheless offer solitude and plenty of silent places.

The Santa Monica Mountains is the only relatively undeveloped mountain range in the U.S. that bisects a major metropolitan area. The mountains extend from Griffith Park in the heart of Los Angeles to Point Mugu, 50 miles away. The range is 12 miles wide at its broadest point, and reaches an elevation of about 3,000 feet.

One of the few east-west trending ranges in the country, the Santa Monica Mountains can cause a little geographic confusion to the first-time visitor. Santa Monica Bay and the Malibu coastline also extend from east to west alongside the mountains so that the mountain explorer actually looks south to the ocean and heads west when hiking up-coast.

The mountains host a Mediterranean ecosystem, the only one in the country under National Park Service protection. Large stretches are open and natural, covered with chaparral and oak trees, bright in spring with wildflowers. Oak woodland and fern glens shade gentle seasonal creeks.

Largest areas of open space are in the western part of the mountains. Point Mugu State Park holds one of the finest native tall-grass prairies and one of the best sycamore groves in the state. The gorge sculpted by Malibu Creek is an unforgettable sight.

In the eastern portion of the mountains, open space is harder to come by, but those pockets that do exist are all the more valuable because they are so close to the metropolis. Canyons such as Los Liones, Caballero, Rustic and Sullivan are precious resources.

Ancestors of the Chumash Indians lived in the mountains as early as 7,000 years ago. Abundant food sources helped the Chumash become the largest Indian tribal group in California at the time of Juan Cabrillo’s arrival in 1542. The Chumash’s highly developed culture included oceangoing plank canoes called tomols and a system of astronomy that was both mystical and practical.

Spanish missionaries, soldiers and settlers displaced the Chumash. During the 19th century, the Santa Monicas were controlled by a few large land holdings—including Rancho Topanga-Malibu-Sequit—and used primarily for cattle ranching. As the land holdings were broken up, some ranchers supplemented their modest living by renting space to visiting horseback riders and vacationers.

Conservationists proposed Whitestone National Park in the 1930s and Toyon National Park in the 1960s, but it wasn’t until Will Rogers, Topanga, Malibu Creek and Point Mugu state parks were established in the late 1960s that the mountains received any substantial government protection. In 1978 the bill creating Santa Monica Mountains National Recreation Area was approved by Congress.

Some 70,000 acres of public land is preserved within the boundaries of the Santa Monica Mountains National Recreation Area. This represents about one-third of the 200,000 acres covered by the range.

The National Recreation Area is not one large area, but a patchwork of state, federal and county land, as well as private property still to be acquired. The major land stewards are California State Parks and the National Park Service.

Hike smart, reconnect with nature and have a wonderful time on the trail.
Hike on.
–John McKinney