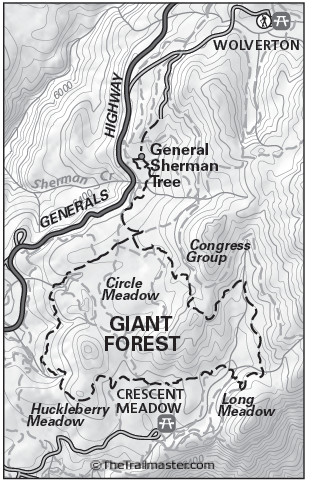 Many are the wonders of the John Muir-named Giant Forest, which holds the park’s greatest concentration of sequoias—more than 8,000 big trees. Begin by joining visitors from across the country and around the world on the short walk to General Sherman Tree, the world’s largest living thing. Next meander Congress Trail, is an interpreted nature trail that loops through the Giant Forest where four of the five largest trees dwell.

Trail of the Sequoias is for the hiker looking for more—more Giant Forest, more hiking, and a little more tranquility. It’s not exactly off-the-beaten path, but it is a much-less traveled route.

DIRECTIONS TO THE GIANT FOREST TRAILHEAD

From Generals Highway, turn west on Wolverton Road and drive a half mile. Turn right for “Sherman Tree” and proceed 0.8 mile to the large parking lot.

Head down the paved path with many stairs and likely with lots of company 0.3 mile to pay your respects to the General Sherman Tree. The tree’s vital statistics: 275 feet high, 102 feet in circumference, between 2,300 to 2,700 years old. General Sherman is some 52,500 cubic feet in volume and weighs an estimated 2.8 million pounds.

From the trailhead close to Sherman Tree, join signed and paved Congress Trail. Cross Sherman Creek on a wooden bridge and begin your tour of the giant sequoias, including aptly named Leaning Tree and some fire-scarred old veterans.

Hikers from near and far wonder why so many magnificent trees in Sequoia National Park are stuck with the names of politicos and obscure presidents. The Washington Tree, named for revered first president, seems appropriate. But the McKinley Tree? The Cleveland Tree?

Paved Congress Trail leads a short mile to a junction with Trail of the Sequoias. Join this path for a half-mile ascent to this hike’s high point, then descend gradually 1.5 miles among more sequoias to Long Meadow.

At the upper end of this meadow is Tharps Log, a cabin used for 30 summers until 1890 by cattle rancher Hale Tharp. From the cabin, you’ll join Crescent Meadows Trail, passing the severely scarred, but still standing Chimney Tree.

Four miles out, join Huckleberry Trail for a brief climb, then follow signs to Circle Meadow, very shortly arriving at another trail junction. Trail of the Sequoias forks right (northeast), traveling a mile to the Senate Group and rejoining Congress Trail for the return to the General Sherman Tree trailhead.