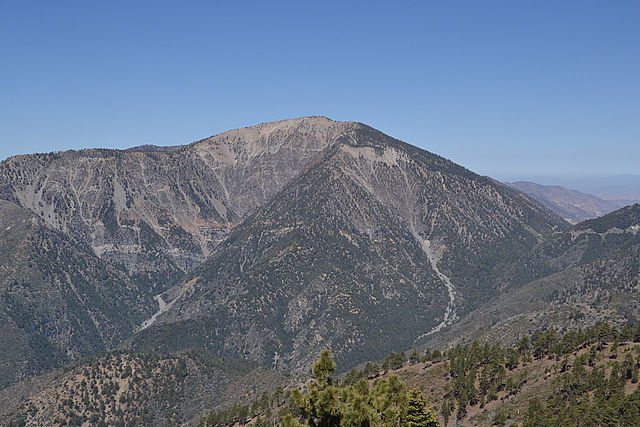 Most of the San Gabriel Mountains lie just north of metro Los Angeles and within Angeles National Forest, one of the nation’s most popular national forests for hiking. For more than a century the range has delighted Southland residents seeking quiet retreats and tranquil trails.

The San Gabriel Mountains are popular with hikers for good reason; in fact, for a lot of good reasons. An obvious reason for the range’s popularity is its close proximity to the 16 million people living in the greater Los Angeles area. The region has a well-deserved auto-centric reputation, yet boasts one of the largest concentrations of hikers in North America. (Arrive early to find parking at such popular trailheads as Chantry Flat!)

My first hiking was in the San Gabriel Mountains with the Boy Scouts of Troop 441, Downey, California. When I was 12 years old, I hiked the 53-mile long Silver Moccasin Trail with a half-dozen boys and our Scoutmaster Arnold Blankenship.

I was the youngest and smallest of the group and still remember the butterflies in my stomach at the beginning of the trail at Chantry Flats Ranger Station. And then we were off—traversing up, down and through deep canyons and along the high ridges of the mountains. The landscape seemed to change every day, from lowland chaparral slopes to oak-lined canyons to fir and pine forests.

I still remember the intriguing names on the land: West Fork, Shortcut Canyon, Chilao Flat, Three Points, Cloudburst Summit, Islip Saddle… We put snow in our Sierra Cups and stirred in Wyler’s lemonade mix. No snow cone ever tasted so good. Little Johnny grew up a lot on that trip and, as the week progressed, I moved from the back of the pack to the middle to the front, until when it came time for summiting a couple of peaks, I passed everyone.

“Look out boys, Johnny has summit fever,” our Scoutmaster declared, as I raced past the big guys. “Does that mean he has to go home?” one of the boys asked. “No, summit fever, that’s a good thing,” our leader explained. “You better catch it yourself or that little squirt is going to beat you to the top by half an hour.”

Many years have passed since my scout days and yet I still get summit fever when approaching the San Gabriel Mountains. The mountains give me “Arroyo Fever” and “Foothill Fever,” too. Surely a million more hikers have felt exactly the same way: hikers have been tramping the trails and enjoying the natural beauty of the mountains since the 1890s.

One of the first trail construction projects in the San Gabriels began in 1864 when Benjamin Wilson built a path to his timbering venture on the mountain that now bears his name. William Sturtevant, who came to California from Colorado in the early 1880s and became a premier packer and trail guide, linked and improved trails and made it possible to cross the mountains from west to east.

More trails were built around the turn of the 20th century when Southern California’s “Great Hiking Era” began. Many rustic trail resorts were later built to serve the needs of hikers. Today, only vintage photographs and scattered resort ruins remind us of these happy times, but that by-gone era left us a superb network of trails — hundreds of miles of paths linking all major peaks, camps and streams.

I enjoyed sharing accounts of trails in the mountains during my long service as the Los Angeles Times Hiking Columnist. I—in fact, all hikers—owe a debt of gratitude to John Robinson, who described 100 hikes in Trails of the Angeles, first published in 1971 and still the best and most comprehensive guide to the trail network in Angeles National Forest. Robinson also wrote The San Gabriels and several excellent histories of the San Gabriel Mountains.

With a huge variation in terrain and elevation, the San Gabriel Mountains are not easily divided by geography into areas to hike. For purposes of geographic orientation, some recreation experts divide the San Gabriel Mountains into a front country and backcountry, foothills and high country. Sometimes the mountains are segmented into an east end, west end, south side, north side, city side, desert side, urban interface and alpine wilderness.

That’s a bit too complicated for The Trailmaster. I focused on the task of selecting hikes you’re sure to like in the canyons and foothills and from high country trailheads along Angeles Crest Highway.

HIKE the San Gabriel Mountains is an opinionated sampling of the range’s delights, from the famed Arroyo Seco to foothills above the San Gabriel Valley to subalpine wilderness and tall summits. Some of the more challenging trails climb the towering backbone of the range, a 30-mile long massif that includes the highest peaks in the range: Mt. Islip (8,250 feet) Mt. Baden-Powell (9,399 feet) and Mt. San Antonio (Baldy), the top summit at 10,068 feet.

Melting snow and rain flows from the shoulders of high peaks feed the range’s largest river, the San Gabriel. The river divides into a dramatic East Fork known for its fierce resistance highway projects (and “Bridge to Nowhere”) and a more mellow West Fork, renown for its trout fishing. Both forks, as well as famed Arroyo Seco, offer great hiking.

You’ll find memorable day hikes along one of the nation’s premiere long-distance trails, famed Pacific Crest Trail, which extends across the crest of the San Gabriel Mountains. And be sure to take a hike along another Trailmaster favorite — the 28.5-mile-long Gabrielino National Recreation Trail. The Forest Service, rarely given to bursts of lyricism, describes it thus: “This trail has been created for you—the city dweller—so that you might exchange, for a short time, the hectic scene of your urban life for the rugged beauty and freedom of adventure into the solitary wonderland of nature.”

Sixty miles long, 20 miles wide, the San Gabriels extend from Soledad Canyon on the west to Cajon Pass on the east. The mountains bless Los Angeles by keeping out hot desert winds, and curse it by keeping in the smog.

The San Gabriel Mountains, known as a Transverse Range, extend east-west across the state. The range is young (less than a million years in its present location), dynamic (it moves and grooves with the San Andreas Earthquake Fault), and complex; the fractured and shattered mountains are composed of many different kinds of rocks of diverse ages.

The San Gabriels are divided lengthwise into a steeper southern front range and a taller northern range by a series of east-west trending canyons. The southern foothills of the mountains rise abruptly 4,000 feet above the L.A. Basin. Mt. San Antonio (Baldy), at 10,068 feet the highest peak in the range, anchors the eastern end of the range.

“The slopes are exceptionally steep and insecure to the foot and they are covered with thorny bushes from five to ten feet high” was how the great naturalist John Muir described the front range of the San Gabriels. The “thorny bushes” of Muir’s description belong to the dominant plant community of the mountains—the chaparral.

Other front-range attractions are the arroyos. These boulder-strewn washes may seem dry and lifeless in the bottomland; however, a hiker following an arroyo’s course upward may soon find lush creekside flora, including ferns and wildflowers, shaded by oak, sycamore and alder.

Higher elevations have a wealth of taller trees: Jeffrey pine, Ponderosa pine, lodgepole pine and the rare limber pine, as well as white fir and cedar.

A huge range of elevations (1,000 to 10,064 feet) means a diversity of environments and a wide variety of birds and wildlife. Larger mammals in the mountains include deer, bears, mountain lions, bobcats and the Nelson bighorn sheep.

First to use the mountains were the native Shoshone, or Gabrielino. For the most part they lived in the valleys and lowlands, and used the mountains for gathering food and hunting animals.

The Spanish gave the range two names: Sierra Madre (Mother Range) and Sierra de San Gabriel. Both were used until 1927 when the U.S. Board of Geographic Names decided upon the latter.

As early as the 1880s, it became obvious to Southern Californians the mountains should be protected from the destruction caused by indiscriminate logging and other ventures. In 1892, the San Gabriel Timberland Reserve was proclaimed by President Harrison. It was the first forest reserve in California, and the second in the U.S. (The first was Yellowstone.) The name was changed to San Gabriel National Forest in 1907, and to the Angeles National Forest a year later.

At the dawn of the 20th century, with President Theodore Roosevelt urging Americans to lead “the strenuous life,” Southland hikers headed for the nearby San Gabriels and spawned “The Great Hiking Era.” Soon every major canyon on the south side of the mountains had resorts or trail camps that offered hikers food and lodging.

Depression-era public works projects of the 1930s brought about a golden age of public campground construction. Angeles Crest Highway, built between 1929 and 1956, linked many of the best high mountain picnic and camping areas.

The bulk of the San Gabriel Mountains (694,187 acres) is under the jurisdiction of Angeles National Forest, 701 N. Santa Anita Ave., Arcadia, CA 91006. Call 626-574-1613 or visit http://www.fs.usda.gov/angeles for the latest road and trail conditions, and information about user fees for campgrounds and select day-use areas.

Learn more about the good work of the San Gabriel Mountains Trail Builders at www.sgmtrailbuilders.org

The 2009 Station Fire burned some 161,189 acres in the San Gabriel Mountains. The fire burned for more than a month and by some accounts was the worst in Los Angeles County history, consuming 250 acres and fully one quarter of Angeles National Forest.

Areas that have been popular with hikers for more than a hundred years, such as the Arroyo Seco, Mt. Wilson and Charlton Flats were blackened by the blaze. About 133 miles of trail were scorched by the fire.

As a veteran hiker of these mountains, I can assure you that the fire-decimated chaparral will soon re-grow, and that the ceanothus, chamise, manzanita and toyon will return sooner rather than later. (Unfortunately, I can give no such assurances about the speedy recovery of the pine-forested areas of the San Gabriels.)

Hike smart, reconnect with nature and have a wonderful time on the trail.
Hike on,
John McKinney