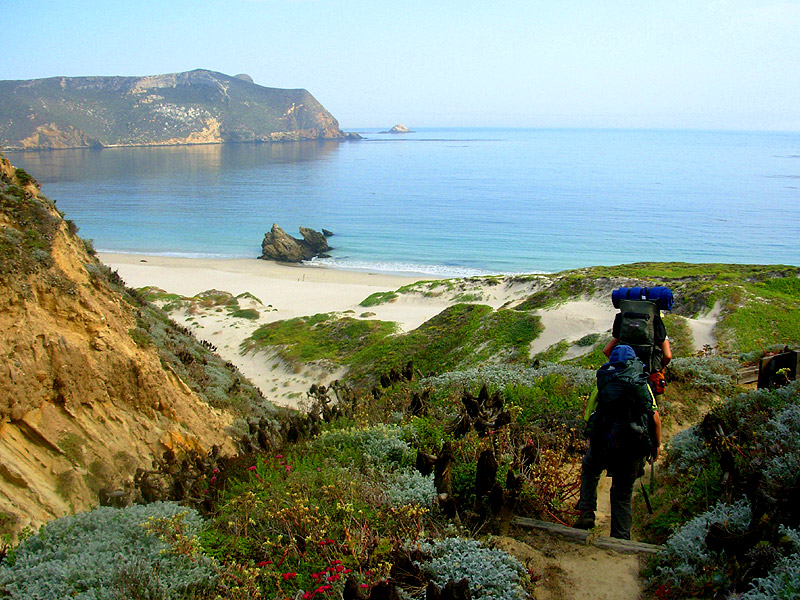 San Miguel, westernmost of the Channel Islands, has much to offer the hiker, particularly if you join a ranger-guided hike. 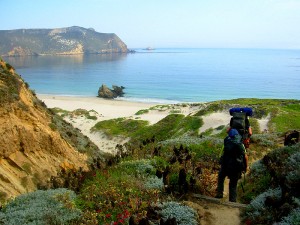 Wind-driven sands cover many of the hills, which were severely overgrazed by sheep during the island’s ranching days. Owned by the U.S. Navy, it was used as a bombing site and missile tracking station.

San Miguel offers some great hiking, and guided hikes. Cuyler Harbor Beach, Cabrillo Monument and the Lester Ranch site are the sights you can see on your own. From Cuyler Harbor, the hike to Lester Ranch is about 3 miles round trip with 700-foot elevation gain.

Rangers and naturalists offer guided hikes to other parts of the island, soon after Island Packers boats arrive on San Miguel.

A trail extends most of the way from Cuyler Harbor to the west end of the island at Point Bennett, where the pinniped population is centered. Trails pass the island’s two round peaks, San Miguel and Green Mountain, drop in and out of steep canyons and traverse the caliche forest, composed of fossil sand casts of ancient plants. Calcium carbonate reacted with the plants’ organic acid, creating a ghostly forest.

Plan a very long day—or better yet, an overnight trip to San Miguel. It’s at least a five-hour boat trip from Ventura. Boat over to the island with Island Packers (805) 658-5730, the Channel Islands National Park primary concessionaire. Island Packers offers plenty of free parking, a gift shop and restrooms.

For more information contact Channel Islands National Park or stop in at the visitor center (805) 658-5730 in Ventura Harbor at 1901 Spinnaker Drive.

Follow the beach at Cuyler Harbor to the east. The harbor was named after the original government surveyor in the 1850s. The beach around the anchorage was formed by a bight of volcanic cliffs that extend to bold and precipitous Harris Point, the most prominent landmark on San Miguel’s coast.

At the east end of the beach, about 0.75 mile from anchoring waters, a small footpath winds its way up the bluffs. It’s a relatively steep trail following along the edge of a stream-cut canyon. At the top of the canyon, the trail veers east and forks. The left fork leads a short distance to Cabrillo Monument.

Juan Rodriguez Cabrillo, Portuguese explorer, visited and wrote about San Miguel in October 1542. While on the island he fell and broke either an arm or a leg (historians are unsure about this). As a result of this injury he contracted gangrene and died on the island in January 1543 and it’s believed (historians disagree about this, too) he was buried here. In honor of Cabrillo, a monument was erected in 1937.

The right fork continues to the remains of a ranch house. Of the various ranchers and ranch managers to live on the island, the most well known were the Lesters. They spent 12 years on the island and their adventures were occasionally chronicled by the local press.

When the Navy evicted the Lesters from the island in 1942, Mr. Lester went to a hill overlooking Harris Point, in his view the prettiest part of the island, and shot himself. Within a month his family moved back to the mainland. Not much is left of the ranch now. The buildings burned down in the 1960s and only a rubble of brick and scattered household items remain.