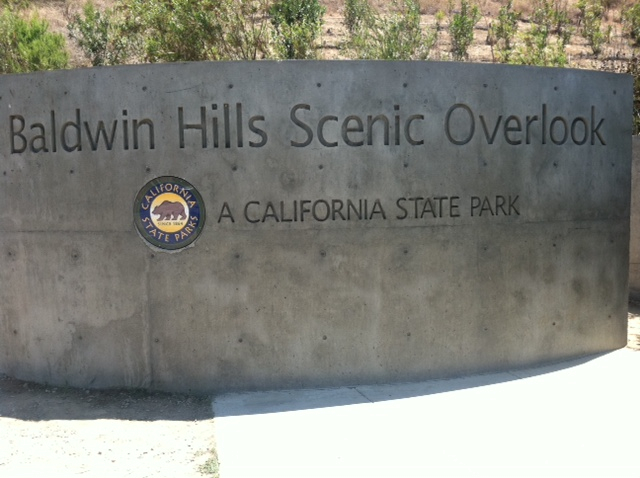 Even on a foggy morning or smoggy afternoon, the vistas from Baldwin Hills Scenic Overlook take in a remarkably wide circle of the metropolis. You can see buildings near and far, from the triangular-shaped Culver City Hotel and Sony Pictures complex in Culver City to the office towers of Century City and downtown L.A. Plus the San Gabriel Mountains, Hollywood Hills and Griffith Observatory, Santa Monica Bay and Catalina Island. 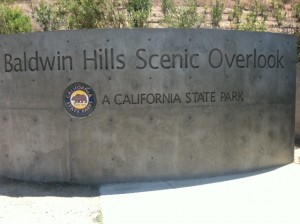 You can’t miss the trailhead and entry to Baldwin Hills Overlook State Park.

You won’t see many nearby parks from the overlook, though; about three million people live in the 5-mile area surrounding the Baldwin Hills and there’s less than one acre of parkland for every 1,000 people. A decade-long conservation effort and more than $40 million saved the hills from a large residential development. Baldwin Hills Scenic Overlook State Park opened in 2009.

More good news about the new state park: “Baldwin Hills” is back as a place name. The parkland on the east side of La Cienega was known as Baldwin Hills State Recreation Area until 1988 when the state legislature renamed it for longtime Los Angeles County Supervisor Kenneth Hahn. In The Trailmaster’s experience, parks named for predominant geography are far easier to remember and locate than those named for politicians.

From Jefferson Blvd. to Overlook is 2 miles round trip with 300-foot elevation gain

At the top of the 68 acre-park is a visitor center (rarely staffed) and a large parking lot (rarely used). Slopes desecrated by dozers have been re-graded to natural contours and replanted with native flora. 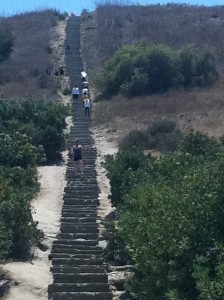 Stairway to Heaven–or at least to the top of Baldwin Hills Overlook State Park.

This is a park for walkers, hikers and joggers, who begin their workouts at the bottom of the hill and hoof it up to the overlook. Reach the overlook by way of a mile-long trail or 300-plus stone steps that head straight up to the summit. Enjoy this as an early morning nature hike or get a great late afternoon workout with some bootylicious stair-climbing cardio.

Baldwin Overlook has been called the “Runyon Canyon of Culver City” because both locales offer popular end-of-the-day workouts of an hour or so and superb vistas. A big difference is Baldwin (being a state park) does not allow dogs while Runyon is overrun with canines.

Directions: From the Santa Monica Freeway (10) in Los Angeles, exit on La Cienega Boulevard and drive south 0.7 miles to Jefferson Boulevard and turn right. (Continuing another mile south will take you to Kenneth Hahn State Recreation Area. Drive 0.9 mile to Hetzler Road and look for very well signed Baldwin Hills Scenic Overlook State Park, complete with a big and bold TRAILHEAD on the south side of the boulevard. Curbside parking is available on both sides of Jefferson. Yes, you can drive up Hetzler Road to the top of the park, but you’re here to hike, right?

The hike: Join the dirt road and soon ascend to the base of the stone staircase. Choose the stairs (and 300-foot vertical gain in 0.2 mile) or continue on the winding path, which offers better and better views.

The trail crosses the stairs three more times; at the third crossing, stick with the main trail and avoid right-forking side trails that lead toward the park entry road.

Cross the staircase a fourth and final time and make a fish-hook, nearly 180-degree turn up to the overlook. Partake of the awesome panoramas and note the path leading to the visitor center, restrooms and a native plant garden.

Interested in more hikes in and near Los Angeles? Check out HIKE Los Angeles