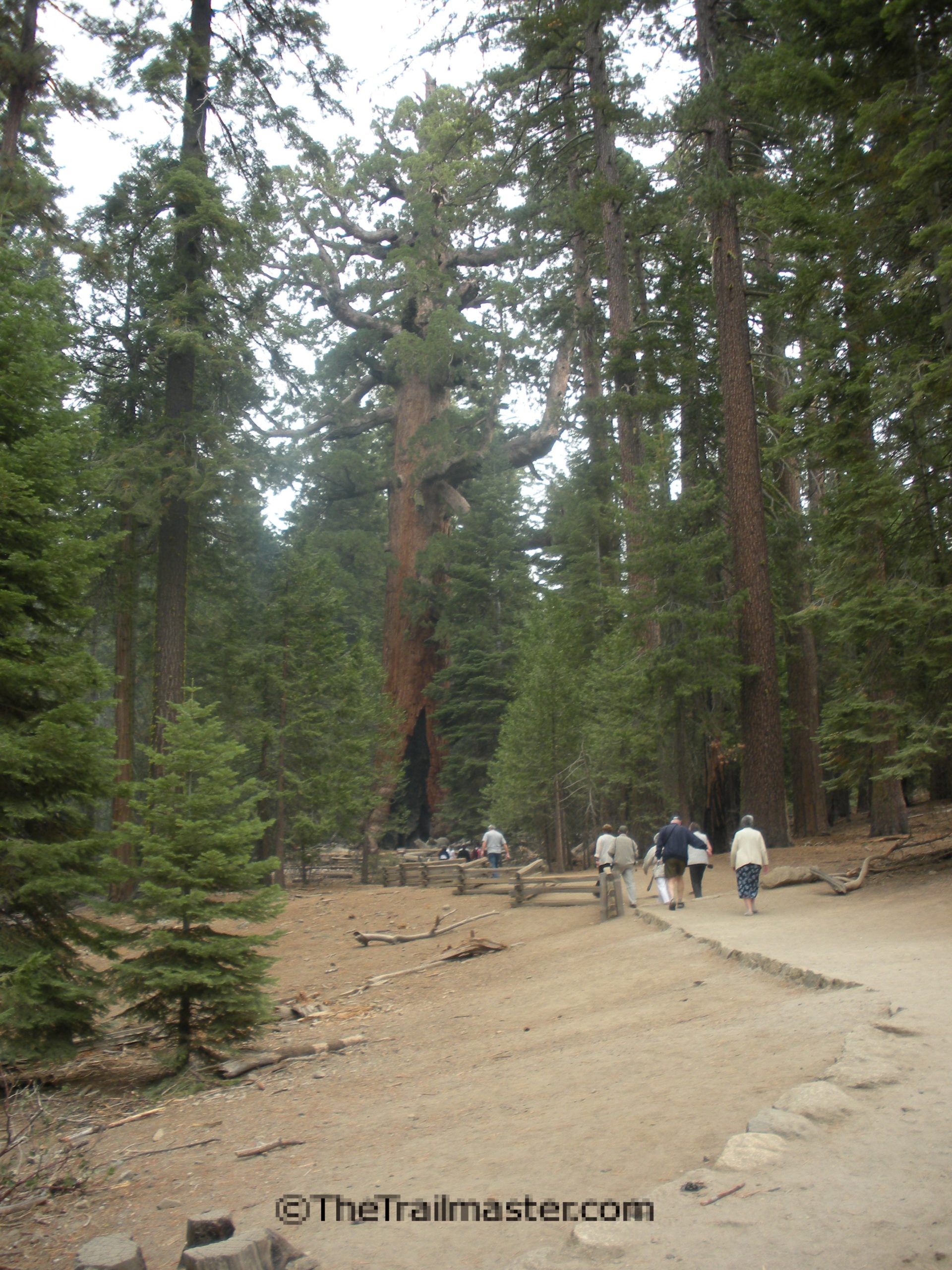 Mariposa Grove is by far the largest of Yosemite’s three groves of giant sequoias and the one that inspired the creation of the national park. See Grizzly Giant, the Three Graces, California Tunnel Tree and many more outstanding big trees. 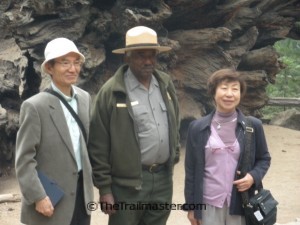 Mariposa Grove is a draw for visitors from around the world.

Likely you will have lots of company on your walk among the world’s largest living things. The enormous trees—combined with easy access, close proximity to the park’s south entrance, a gift/snack shop, and a narrated open-air tram tour no less—really draw a crowd.

From Highway 41 at Yosemite’s South Entrance Station, drive east two miles to Mariposa Grove. The huge parking lot can fill up by 10 a.m. on a busy summer morning. When the lot is full, NPS stops entries and provides free shuttle service from Highway 41.

Pick up a copy of the park service’s “Mariposa Grove of Giant Sequoias” pamphlet (available in several languages) from the dispenser and begin walking the gentle path.

You’ll soon arrive at Fallen Monarch, which came to the nation’s attention in 1899 via a widely circulated photo of U.S. Calvary officers (with their horses!) posed atop the horizontal tree. Cross the road, ascend some steps, and cross the road again.

Mariposa Grove: Not a place for solitude, but you can hike past much of the crowd.

The path leads to Three Graces, with roots so intertwined that should one tree fall, the other two would topple as well. Apart from the three is a more solitary sequoia dubbed The Bachelor.

Next visit Old Grizzly, grove patriarch, blackened, scarred and estimated to have sprouted 2,700 years ago; it’s likely the oldest sequoia in Mariposa Grove. For most visitors, the famed tree is the unofficial “tourist turnaround.”

Not far from Grizzly Giant is California Tunnel Tree. No nineteenth century visit was complete without a stage ride through a tree with a tunnel in its midsection. It’s hike-through not drive-through these days.

Onward on Upper (or Outer) Loop Trail to the Faithful Couple, two large trees fused together for 50 feet or so along their lower trunks, but separated above. Inspect wildfire-bisected Clothespin Tree meet the tram road, and join Museum Trail. Descend to Grove Museum and learn more about sequoia ecology and history. The museum is located on the site of Yosemite guardian Galen Clark’s 1864 cabin.

The tree tour continues with the curious Telescope Tree; look up the trunk to see the sky. Thousands of wagons, then cars drove through Wawona Tunnel Tree, from 1881, when a tunnel was bored through it, until the big winter of 1968-9 when it fell. The path curves west to visit Galen Clark Tree, honoring the Yosemite pioneer and discoverer of Mariposa Grove.

Return to the trailhead via the sequoias by backtracking to the museum and descending to the parking lot. Or take Outer Loop Trail, which travels out of the sequoias into a lovely mixed forest of incense cedar, sugar pine and white fir, and circles back.

Hike On.
John McKinney,
The Trailmaster

Interested in more hikes in Yosemite? Check out HIKE Yosemite