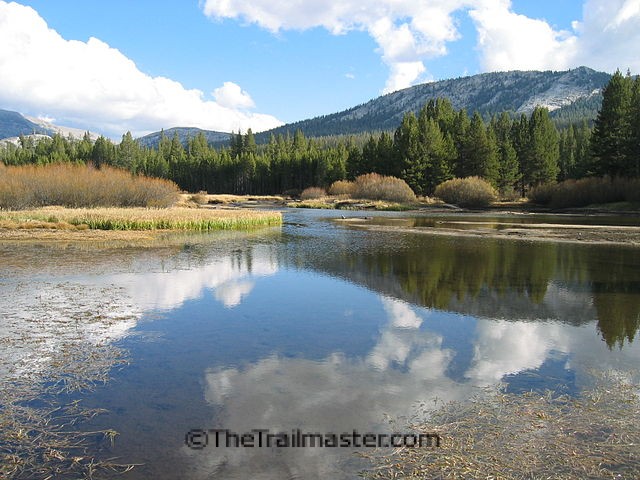 By John McKinneyNo Comments
From Tioga Road to Parsons Lodge and Soda Springs is 1.5 miles round trip 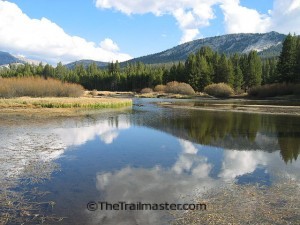 Summers to remember, hiking through the Tuolumne Valley.

John Muir’s first summer in the Sierra was spent as a shepherd, tending a flock of some 2,000 sheep pastured in Tuolumne Meadows. Muir’s journals of that time are filled with the wonders of nature he observed along with his first thoughts about the preservation of Yosemite. Muir soon realized that sheep, which he later characterized as “hoofed locusts,” and other grazing animals could destroy an alpine meadow.

Today a length of the John Muir Trail crosses the great naturalist’s beloved Tuolumne Meadows. Other paths lead to Parsons Memorial Lodge named for Edward Parsons, who fought alongside John Muir to preserve the park, Hetch Hetchy Valley and other wildlands during the early days of the Sierra Club. After Parsons, an accomplished photographer, outings leader and early Sierra Club President died in 1915, the Club constructed this lodge in his honor.

Parsons Lodge, long ago deeded to the National Park Service, has served as a reading room/ library for generations of visitors. Many a hiker has found a cool retreat on a hot summer’s day or taken refuge from an afternoon thunderstorm.

Interpretive signs posted sporadically along Tuolumne Meadows paths offer insights about Parsons, Muir, the old Tioga Road and the Native American tribes who visited the meadows for so many centuries. For more information about the meadows, visit Tuolumne Meadows Visitor Center (open summer only), located about 0.1 mile west of the trailhead on Tioga Road.

I like to begin this ramble from the north side of Tioga Road, just 0.1 mile east of Tuolumne Meadows Visitor Center. Parking is along both sides of Tioga Road. Some hikers prefer to access the Tuolumne Meadows trail system from the Lembert Dome/Glen Aulin/Soda Springs trailhead located a little farther to the east. 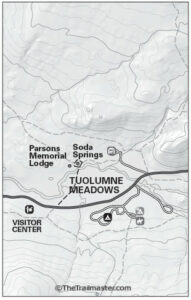 The wide path extends north across the meadows. Families linger along the bends of the Tuolumne River to fish or to enjoy one of the best picnic spots on the planet.

Cross the wooden bridge over the Tuolumne River, bend left along the river and take the signed trail forking right to Parsons Memorial Lodge. From the lodge, follow the signed path very briefly east to Soda Springs, a muddy area where carbonated water percolates up from the ground.

The trail loops past some interpretive plaques then angles back toward the bridge over the Tuolumne River. From here, retrace your steps back to the trailhead.

Hike on.
John McKinney,
The Trailmaster