By John McKinneyNo Comments
Wonder View Trail leads to the 1,820-foot summit of Cahuenga Peak, high point of the Hollywood Hills. The narrow and steep path (a true hiker’s route) continues to nearby Mt. Lee, which hosts the famed HOLLYWOOD Sign.
This trail is sure to become increasingly traveled with the recent closure of the Beachwood Dive trailhead, for many years the most popular way to hike to the HOLLYWOOD Sign.
Wonder View Trail: From Wonder View Drive to Cahuenga Peak is 2.4 miles round trip with 900-foot elevation gain; to Mt Lee is 3.2 miles round trip 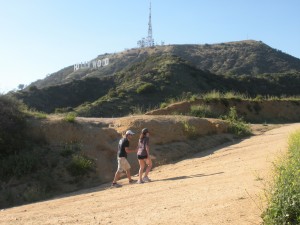 Visitors from across the nation and around the world take a hike to the famed Hollywood Sign.

In 2010, hikers and movie fans from across the nation and around the world were delighted to learn that creative conservation efforts, combined with fundraising from private and public sectors, succeeded in purchasing the peak and adding it to Griffith Park.

As the story goes, Cahuenga Peak piqued the interest of aircraft mogul (and movie producer) Howard Hughes, who purchased it in the 1930s with the intention of building a mountaintop love nest for Ginger Rogers. She turned him down and the property remained undeveloped (a minor miracle in SoCal) until 2002 when a group of Chicago developers bought the land from the Hughes estate.

When the developers announced plans to subdivide the peak into luxury estates, local conservationists, film fans, and celebs rallied to “Save the Peak.” Some $12 million was raised to purchase the 138-acre site. Hollywood notables, including Steven Spielberg and Tom Hanks, plus the Tiffany & Company Foundation, Hugh Hefner and Aileen Getty contributed serious cash, as did state and local agencies.

As the story goes, Cahuenga, which names a pass, a peak and nowadays a boulevard was once a native Shoshone village located on the banks of the Los Angeles River near present-day Universal City. The peak is the 12th highest in the Santa Monica Mountains. 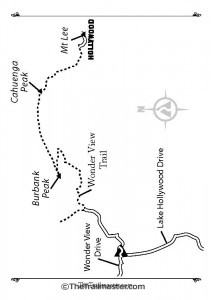 Walk 0.25 mile up paved Wonder View Drive to its end. Hike past a yellow vehicle gate on dirt road 300 feet to unsigned Wonder View Trail on your right. Begin a steep eastward ascent east, zigzagging up the south slope of Cahuenga Peak. Enjoy wonderful views of Mt. Lee with its forest of antennae, Griffith Observatory, Mt. Hollywood and downtown L.A. 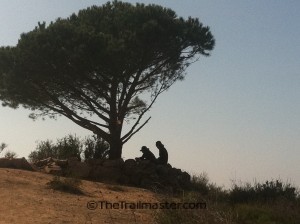 Walk to the Wisdom Tree in a less-traveled part of Griffith Park.

After a quite aggressive half-mile climb the rough trail gains a ridgeline and splits. A short side trail leads left to a lone pine tree and the top of Burbank Peak (1,690 feet). Pause to read the summit logbook stashed below the Wisdom Tree; hikers have been know to get very creative with their philosophizing in this book. Clear-day panoramic views are terrific—particularly angles on the San Fernando Valley and San Gabriel Mountains.

Return to Wonder View Trail and hike across a ridge. The path drops to a saddle between Cahuenga Peak and Mt. Lee (1,680 feet) and ends at Mount Lee Road. Turn right and walk up the paved road for a view through chain-link fence at the HOLLYWOOD Sign.