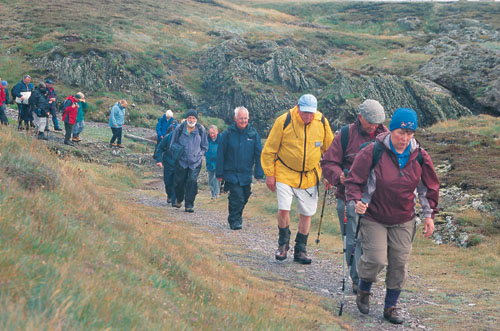 When Abraham was 99 years old, the Lord appeared before him and said: “I am God Almighty, walk before me and be blameless.” 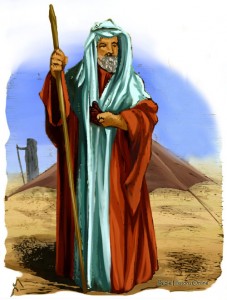 Abraham continued his walk in every sense of the word well past the age of 100. (illustration Bible History online)

According to Genesis 17, the Lord assigned old Abraham some enormous tasks; he was to become the father of many nations and to take everlasting possession of the whole land of Canaan for himself and his descendants. Further, in order to keep covenant with the Lord he was to circumcise all the males in his household as well as all other males in the area.

Abraham complied with all of the Lord’s commands but was taken aback by one last request: Create a son with his wife Sarah.

At this point in the conversation the Bible reports: “Abraham fell face-down and laughed.”

“Will a son be born to a man a hundred years old?” asked Abraham when he pulled himself together. Then he remembered his wife—at 89 not exactly in her prime childbearing years. “Will Sarah bear a child at the age of 90?”

Virility and fertility proved not to be problems and a son was born a year later, as the Lord had promised. Abraham not only fathered Isaac, but founded the Jewish nation.

As Abraham demonstrates, there is old and there is old; that old adage “you’re only as old as you think,” has been proven time and time again since Abraham was born about 2166 B.C. Recent studies confirm that older walkers are far more fit and of far more cheerful disposition than their sedentary counterparts.

These older hikers in England’s Lake District aren’t about to hang up their boots. (photo touristnetuk.com)

Many older folks are wrongly convinced their need to walk diminishes with age, a survey conducted by the President’s Council on Physical Fitness reports. Many seniors are also apt to exaggerate the dangers of walking and their inability to walk.

Walking is a way for seniors to stay out in the world. To best resist the many paralyzing effects old age, seniors would be wise to combine the body, the mind and the heart—keeping all vigorous by continuing to walk, to learn, and to love.

Almost anyone at any age can walk—and will feel better for it. At God’s request, Abraham began walking among his people, among the lovely oak grove of Mamre, and across the desert plains of the Holy Land. Abraham, who did not receive God’s call to walk until he was 99, lived to the ripe old age of 175.

Walk until you’re 99—or older!

* Who are the oldest walkers you know? Why do they walk? What puts a spring in their step?

* Early sport-walker Edward Payson, at 22 years of age, caught the nation’s attention when he race-walked from Boston to Washington, D.C. to the presidential inauguration of Abraham Lincoln. More remarkably, he was still walking fast some 50 years later; when he was 71, he walked from New York to San Francisco in 105 days.