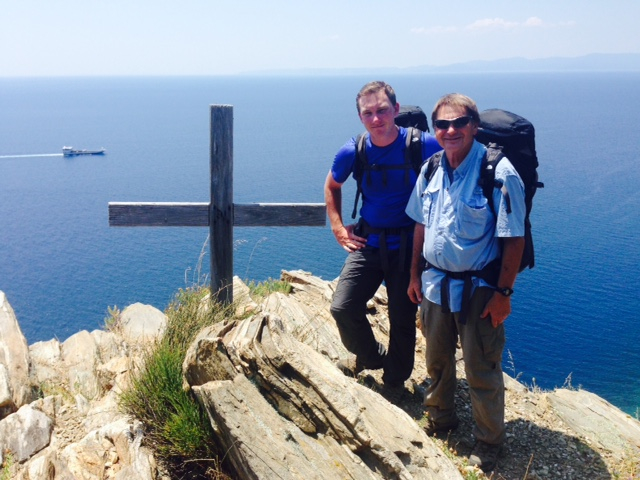 Mount Athos, the Holy Mountain, has several faces: a Greek landscape of astonishing beauty; monasteries of an architectural genius that will not be seen again; two thousand monks living much the same as their brothers in Christ did, a thousand years ago. 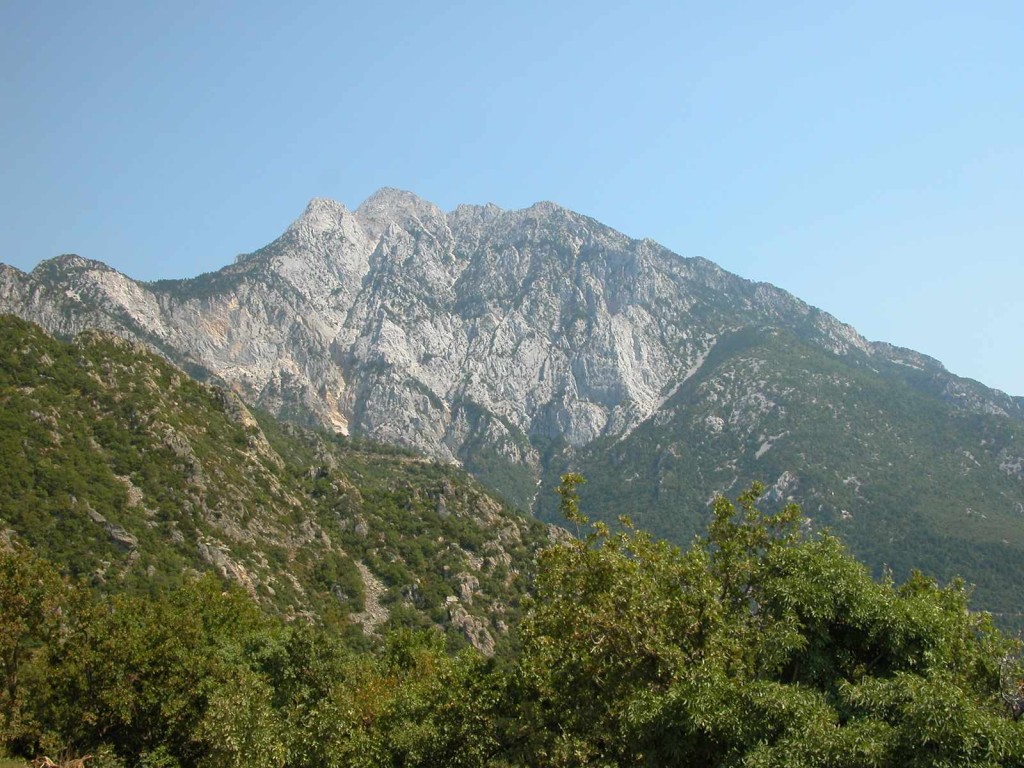 Mount Athos, the Holy Mountain, one of the great natural beauties of Greece.

And the Holy Mountain is one of the world’s great hikes. The monks call it the “Garden of the Holy Virgin Mary” and surely it’s one of the most exotic and pristine places to hike in Europe.

I recently hiked the Holy Mountain with my son Daniel, who just graduated from high school, my friend Spiro Deligiannis, and his godson Zachary Deligiannis, who just graduated from college and nursing school. Spiro and I had hiked to the top of the mountain once before 20 years ago and it was hugely satisfying to return with two fine young men and hike the Holy Mountain again.

Trailmaster John McKinney and his son Daniel. You’re never more than a few miles from the sea when hiking around the Mt. Athos.

This isolated, pyramid-shaped peak rises more than six thousand feet over the northern Aegean Sea. It stands alone at what seems like the end of the earth, but is actually at the very end of the 37-mile long peninsula of Agion Oros (“Holy Mountain” in Greek).

From Saint Anna Skete (a monastic community perched on the cliffs on the west side of the peninsula) it’s a very steep, eight-mile ascent to the summit of Mount Athos with a 5,800-foot elevation gain. Most of the route is via ancient mule track, with some stairs at lower elevations and a few lengths of trail improved by the good works of the Friends of Mount Athos.

Anyone whose first impression of the Greek landscape was formed by a visit to one of the country’s sparsely vegetated islands or watching the typical Travel Channel episode about Greece is sure to be astonished by the lush green landscape of Mount Athos. The spring/early summer wildflower show, highlighted by scarlet poppies, is spectacular.

The trail leads through several plant communities, beginning at the lowest elevations, where there’s a thriving Mediterranean flora (similar to the one in the hills near my home in Santa Barbara, California). The mountain also hosts an oak and chestnut woodland, scattered stands of pine and fir, and an alpine zone above tree line.

Water is available from springs along the way, as well as from the Panaghia Chapel, where there is a hiker shelter, and at the Metamorphosis (Transfiguration) Chapel at the summit.

Mount Athos, 2,030 meters (6,660 feet) in elevation, is not huge by mountain standards but positively awesome when you approach it by trail because no other peaks are nearby. The mountain seems to rise straight out of the Aegean Sea. Vistas from the top are out of this world—the whole peninsula, including many monasteries—and on especially clear days, Mount Olympus on mainland Greece and the eastern coast of Turkey. 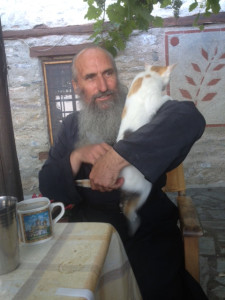 Father Daniel offered us hospitality, wise counsel, and frozen water bottles to take with us on the trail to the top of Mount Athos.

The Holy Mountain is holy ground for the world’s 270 million Orthodox Christians. In keeping with monastic tradition dating from the days of the Byzantine Empire, women have not been permitted to set foot on Mt. Athos for more than a thousand years. In fact, visits, except by male religious pilgrims, are strictly regulated.

The peak is mainly known among Greek Orthodox and Russian Orthodox pilgrims and hikers and its summit is infrequently visited. It’s a strenuous day hike to the top but doable by hikers in pretty good condition. The relative scarcity of hikers is not due to the difficulty of the ascent, but rather because of its isolated location within an autonomous monastic-republic, which requires prospective pilgrims to secure difficult-to-obtain entry permits.

Our hike took place during the first week of July because that’s when we were suddenly issued our Diamonitirio (Mount Athos “Passports”). We backpacked from monastery to monastery, visited a half dozen monasteries, then spent three days with Father Daniel, a monk who lives near Saint Anna Skete. 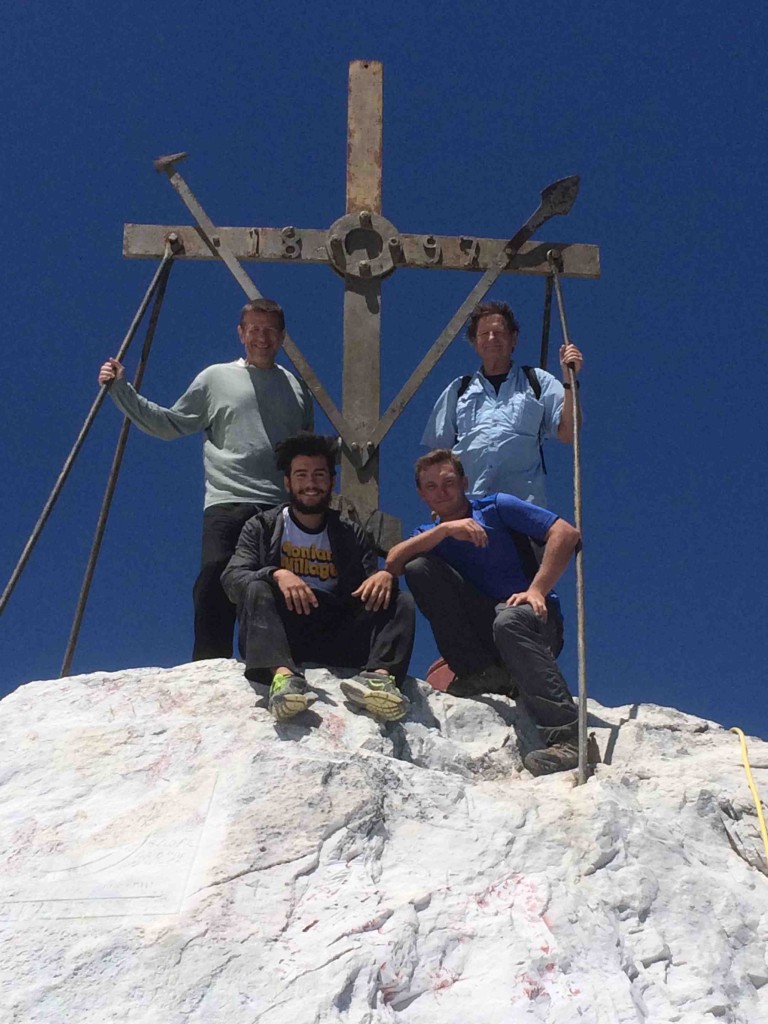 Atop Athos is an iron cross, where we four pilgrims are all smiles after our long climb: (L-R) Spiro Deligiannis, John McKinney, Zachary Deligiannis and Daniel McKinney.

Certainly I began looking at hiking a bit differently after hiking up, down and around the Holy Mountain. My first trip was an accidental pilgrimage. Then the Los Angeles Times hiking columnist, I had a strictly pedestrian purpose for my trip: hike around the Holy Mountain and write newspaper and magazine stories about Mount Athos. However what I encountered there turned out to be a personal epiphany composed of hiking, Orthodox Christianity, icons, and adoption. The experience was nothing short of a miracle. My second visit was a more purposeful pilgrimage—a grand hike around the mountain with stops at monasteries and deeply meaningful visits with monks.

I’m completing a book about my experiences on Mt. Athos: “Hiking the Holy Mountain: Revelations on the Trail Between Heaven and Earth.” I look forward to its publication and sharing some wonderful stories. In the meantime, you can get a sneak preview behind the scenes by visiting Hiking the Holy Mountain Gallery